It’s pretty clear to most businesses in this day and age that moving to a VoIP (Voice over Internet Protocol) system is the smart choice to make. Compared to traditional telephone services, VoIP simply cannot be beat. The cost savings alone are enough to convince most companies, but, add in multiple advanced features, the ability to scale at will, the increased reliability, accountability and uptime guarantees, and it’s really not hard to see why VoIP is the smart solution for smart companies.

But ‘VoIP’ itself is somewhat of an umbrella term. There are many ways in which a VoIP service can be implemented, and one of the most hotly debated standoffs that emerge from this field is that between hosted PBX and SIP Trunking.

Indeed, you may well find yourself struggling with this very decision right now, which is why we’ve put together this article to help you make the right choice. As descendants of VoIP, all calls with hosted PBX and SIP Trunking are placed over the internet, rather than the traditional copper wires of the PSTN (public switched telephone network). But they each involve a variety of different functions and features, some of which will be more beneficial to certain businesses than others.

So, first, let’s take a look at each service in isolation so we understand exactly what we’re dealing with.

What Is Hosted PBX?

Sometimes referred to as cloud PBX, virtual PBX, IP centrex or IP PBX, hosted PBX (private branch exchange) is a telephone system that essentially provides classic telephone calling features without the need for any on-site equipment other than the IP phones (which in many cases are also not required, as soft phones and webRTC capabilities may be available).

Hosted PBX always comes with the standard features that you would expect from a modern telephone system — call conferencing, do not disturb, call forwarding, music on hold, etc. But, in addition to the these, there are also many advanced features that can be very attractive to certain businesses.

Generally speaking, Hosted PBX is the ideal, inexpensive solution for the small business or enterprise that is not expecting to grow significantly in the foreseeable future.

Bigger businesses, on the other hand, say with over 100 employees, will typically require a solution that is much more expandable.

What Is SIP Trunking?

SIP Trunking is defined as a virtual telephone line which connects a business telecom system to the public phone network. A SIP Trunk creates an alternative to connecting to the PSTN. The SIP Trunk provider allows users to continue to use their existing telephone system and equipment (i.e. the PBX and the telephones themselves), but cost is significantly reduced by replacing the traditional trunk (i.e. the copper wires over the PSTN) with the internet (SIP) Trunk.

Many businesses will, of course, already have PBX equipment in place, and so by simply adding SIP Trunking to this existing system, business communications are improved and costs are saved as both voice and data are carried on the same line, thusly eliminating the need for any additional lines that may be used to send faxes or access the internet.

One of the main advantages of using SIP Trunking is that it offers unlimited connectivity, even to remote locations.

However, what is slightly prohibitive with SIP Trunking is that some of the advanced features and functionality will be restricted to the PBX that is already in use by the business.

Generally speaking, it is the larger enterprises who tend to use a SIP trunking solution. This is simply because SIP Trunking offers greater scalability, flexibility and cost savings on a larger scale than hosted PBX. And many larger organizations have already invested significantly in their on-premise equipment, so this is an ideal option for leveraging existing infrastructure, while still finding ways to saving on costs.

The choice between SIP trunking and cloud PBX or hosted PBX depends on the size of your operation and the immediate and future needs of your brand.

To be competitive in the modern business landscape and provide customers with the kind of experience they expect from a contemporary and digitally savvy brand, getting on board with a unified communications solution is going to become increasingly important. With remote working on the rise, deploying unified communications to facilitate working from home will also help make your brand more competitive in the ongoing talent crisis.

So, perhaps more important than the decision between a cloud PBX and SIP trunking is the decision to get started with a VoIP unified communications solution in the first place. Get in touch with net2phone today and our experts can help you make the best decision for your business.

The expense associated with getting started with SIP trunking will depend largely on whether your organization already has an on-premises PBX installed. If so, the difference in set up costs between cloud PBX and SIP trunking is negligible, but if you need to install a PBX, the cost of getting set up with SIP trunking can be prohibitive.

SIP trunking also carries higher maintenance costs as your IT team will be responsible for the upkeep of the on-premises PBX. With a cloud hosted PBX, your provider will take care of all updates and maintenance. All you need is to pay your provider according to your plan.

The advantages of SIP trunking become apparent once your organization grows beyond 100 or so employees and the call volume you need your unified communications solution to manage grows larger.

Of course, security is a massive concern for all digitally transformed businesses these days and SIP trunking undoubtedly provides the best service when it comes to keeping call data safe and secure. The security of Cloud PBX depends on the protocols put in place by your provider and can be more vulnerable to social engineering scams.

Hosted PBX Vs. SIP Trunking — Which Is Most Suitable For Your Business?

The deciding factor when choosing between SIP Trunking and hosted PBX should be the size of the business and current infrastructure. Smaller businesses will nearly always be better off with hosted PBX, as it provides all of the functionality of VoIP at little cost, both at the startup phase, and then later when it comes to maintaining the system. SIP Trunking, on the other hand, is better for larger businesses with more employees and an existing PBX in place. 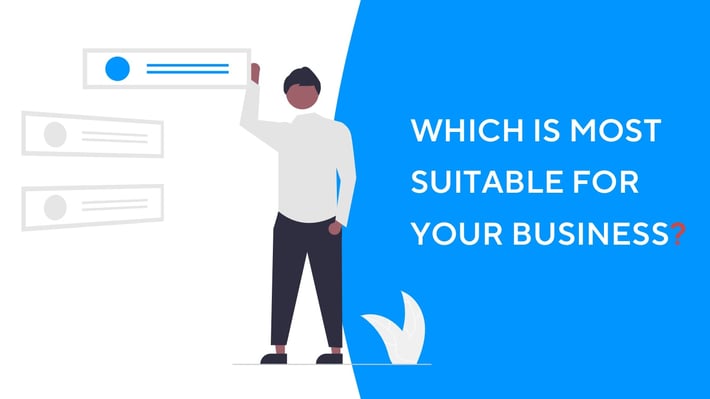 Since the PBX provider owns and maintains all the hardware involved with running a hosted PBX system, the startup costs are kept to an absolute minimum. In addition, the scalability that hosted PBX offers means that the system can grow with your business. Businesses also benefit from having access to the full range of VoIP services as listed above.

Businesses choose SIP Trunking when they want to expand their telecommunications operations at scale. SIP Trunking can use all of the features that come with the PBX, but efficiency and quality is significantly improved via the removal of primary interfaces.

Huge cost savings are also incurred, mainly due to line pooling, which is simply the ability to share phone lines across multiple locations. Further cost efficiency is also engendered as audio and video are consolidated into a single line.

Indeed, before making the switch, businesses should take into consideration whether or not they already have PBX equipment. If so, then moving to SIP Trunking will be very easy to implement, and huge cost savings can be incurred straight away.

If the business is still relatively small, has remote users, or does not have or plan to invest in an on-premise PBX and infrastructure, then hosted PBX will almost definitely be the right move, as it offers all the big functions and features of modern telephony at low cost.

SIP Trunking vs ISDN: Which Should You Choose?

SIP Trunking is quickly rising in popularity with businesses around the world. This is due to the benefits offered by the technology, the most obvious of which lie in cost...
Read More
Apr 27, 2022

The cost benefits of SIP Trunking are now well-documented, and lots of businesses are waking up to the idea that they can save up to 90% on telephony by implementing SIP. But...
Read More
cloud pbx May 2, 2022